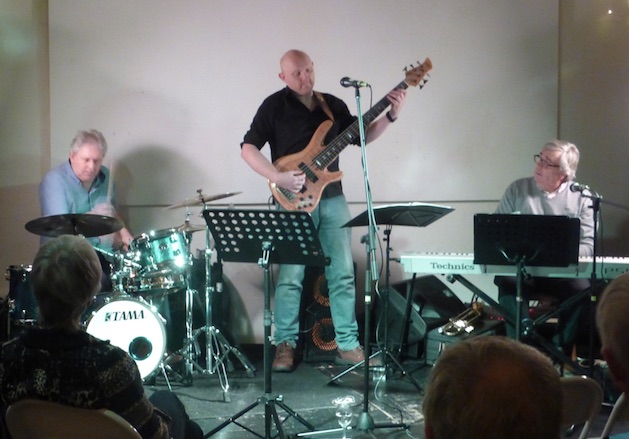 A vastly experienced trio of  professional musicians who have a wealth of experience accompanying 100’s of Jazz artists from all over the world and can play many different styles. Renowned as one the best jazz trio’s in the UK all can sight read music to an extremely high standard and each are renowned Jazz improvisors. The Trio usually provide the backing for visiting Jazz artists at Swansea Jazz

The trio have accompanied and worked with many Jazz performers including -

Paul is a native of Swansea in South Wales, and has been playing drums since around the age of eight. With a professional career spanning nearly 30 years he has earned a reputation as one of the most versatile and talented players around, enjoying success in many different genres from rock, pop, jazz, funk and big band, to a 100-piece orchestra for a live Radio 3 performance of Bernstein’s ‘MASS’ with the BBC NATIONAL ORCHESTRA OF WALES.

His playing career started in the workingmen's clubs of South Wales at the tender age of 14 and then progressed to residencies with dance bands and rock bands before becoming professional in 1983.

Much of his professional career has been spent touring the UK and many other countries including Australia, Hong Kong, Korea, New Zealand and Dubai. He has appeared on countless television and radio programs working with a diverse range of artistes including the Chamber Orchestra of Wales, Michael Ball, Charlotte Church, Sasha Distelle, Dave Edmunds, Lesley Joseph, Eartha Kitt, Cerys Mathews, Leo Sayer, Larry Adler, Sir Harry Secombe, David Soul, Shakin Stevens, Bryn Terfel, Bonnie Tyler, Julian Lloyd Webber, and Toyah Wilcox. He has even featured in a televised drum duet with comedy legend Eric Sykes and recently appeared on an episode of the sky 1 series 'Stella'.

Paul has toured extensively with the likes of Freddie Starr, Roger Whittaker, Lesley Garrett, and Brotherhood of Man and has been a member of Welsh comedian Max Boyce's Band for 30 years. He has also completed three UK tours with the winners of the BBC’s ‘Last Choir Standing’ program, `Only Men Aloud’ and also in 2013 toured with X factor runner up Rhydian roberts.

Over the years Paul has also gained vast experience in the recording studio playing on many albums,and television theme tunes most recently on Only men aloud's new album 'On the road', Dan and Laura Curtis' album 'Love on 42nd street' reaching number one in the Amazon and iTunes Broadway and Vocal charts in the UK and US and also Welsh Television soap opera theme tune 'Pobol y cwm'.

During the last 15 years, Paul has been a regular member of the SWANSEA JAZZLAND house trio, playing for many visiting musicians including Jim Mullen, Mornington Lockett, Dave O’Higgins, Bruce Adams, Dick Pearce, Lee Gibson and many more.

He has also worked on many theatre shows including UK tours of Saturday Night Fever, Grease, and Crazy For You.

Paul is also a busy teacher taking pupils of any age through different styles including jazz, rock, pop, theatre.

Because of his consummate skill and total professionalism, Paul is consistently called upon to play at the highest level in some of the most demanding `live’ and studio situations.

Below is a list of some of the many television programs he has worked on.

Born 14th December 1974, Alun became interested in playing bass after seeing Gene Simmons with Kiss on TV in the late 80s ( that's right - it wasn't even the make up era, it was the dodgy wig Crazy Nights era!). Unable to afford a bass, he set about dropping hints for the following Christmas ( this started in the Spring!) and set about learning everything he could about the bass and music . For reasons best known to himself, he strung a 15" ruler with four elastic bands and used that for nearly a year. Alun later said that "Using the Ashbory (which has silicone rubber strings) feels like I've come full circle."

Alun started off playing in rock and metal bands which rehearsed a lot but never actually gigged until he met guitarist Ian Simmons in the early 90's and joined Nothing Personal, a jazz-rock 5 piece featuring Ian's brother Steve on sax. This band played various festivals, including the Vienne Jazz Festival in'94, and played many club gigs ( often to no-one) This band was then largely responsible for everything that followed...

Through Steve Simmons, he joined Fat Barry's Soul Band, a Welsh Commitments/Blues Brothers style act that he played with for several years,leaving in 1999. Steve was also playing with rock group Karnataka, which ultimately led to friendships that led to Alun being asked to join Panic Room when Karnataka dissolved.He recorded two albums with Panic Room, including the award winning "Satellite" which included writing credits on "Black Noise" and "The Great Divide".

Through Nothing Personal, Alun also met jazz pianist Dave Cottle who runs the hugely successful Swansea Jazzland club. This collaboration has led to Alun playing with some of the finest players on the UK jazz scene as well as backing visiting musicians from Europe and the US.

Alun is a busy recording artist, producing a string of solo releases in addition to playing on albums by artists in the UK and,thanks to the internet, Europe and the US.

Born into a musical Family, Dave started plying piano at 4 years of age with lessons from his grandmother, a prolific pianist and tutor.

Dave’s early years were spent treading the boards in show business where he and his younger brothers Richard and Laurence preformed a comedy and magic routine throughout the late 1960’s and 1970’s. Gradually the comedy and magic got replaced with music as the boys musical ability increased. Appearances followed on Tv/Radio and theatres such as the London Palladium, plus summer seasons with artists of the day such as Cilla Black, Ted Rodgers, Vince Hill, Ken Dodd, Freddie and the dreamers, Bill Maynard, Stan Sennet, Wyn Calvin. Dave also picked up the trumpet at 13 years of age as a second instrument. Dave passed his classical grade 8 piano exam at 15 years of age. With a strong ear for improvisation coupled with excellent music reading skills, Dave was and remains in big demand on the music scene for a variety of musical work - bands / accompanying cabaret artists/ musical theatre shows. Dave’s father Peter was a dance band musician and Dave was “depping” for his Dad in Dance bands at 16 years of age. Dave played lead trumpet with Matt Monroe in 1977.

As teenagers Dave and his brothers were playing Traditional Jazz with Trumpet/Clarinet/Trombone line up and Dave first found an interest in Jazz Music,

In his early 20’s the show business side of things declined when both Dave’s brothers moved away to pursue their own musical careers. Dave decided he didn't wish to move away from Wales and having joined the GPO in 1973 as an apprentice engineer remained with BT for 40 years, retiring in 2013.

Dave pursued his interest in Jazz, playing at the the Swansea Jazz Society events at the Liberal Club (now St James Club - Swansea Jazzland) back in the 70’s and 80’s. and listening to the many fine artists that visited in those days. Dave also formed his own successful function band in 1983 - The Dave Cottle band which has played at over 1000 wedding partied, plus corporate events.

Dave’s jazz piano skills were honed through working with a host of top Jazz performers. Dave is a self taught Jazz pianist, having studied classical music to a high standard and technical ability he developed his own versatile style and learned jazz harmonies and arranging skills.

Since 1997, Dave has programmed the weekly events at Swansea Jazzland, to date arranging over 1000 jazz events at the venue. Dave is Artistic director for Swansea International Jazz Festival - Running for 6 years since 2014, it was The biggest Jazz Festival in Wales in 2016 & 2017