His range and brilliance have made him a “first call” for studio and live work since his precocious arrival on the scene more than thirty years ago.

​His recorded catalogue is immense.  He has made over thirty albums as leader and co-leader alone, and the list of his session and side-man work includes Bjork, Bryan Ferry, Michel LeGrande, Clare Teale, Westlife, Jools Holland and Jamie Cullum. He has toured and played residencies with such diverse and demanding figures as Ruby Braff, Freddie Hubbard, Scott Hamilton, Warren Vache, Ken Peplowski, Harry Allen and Conte Candoli.

In British jazz, the young Barnes was recognized – and hired – by the established greats of the time:  Stan Tracy, John Dankworth, Kenny Baker, Bob Wilber, and Humphrey Lyttelton.  But he is equally respected for his longstanding and fruitful collaborations with contemporaries such as David Newton, Bruce Adams, and Martin Taylor. 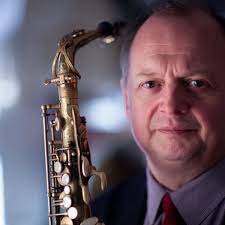 Alan Barnes’s unique musicianship, indefatigable touring, and warm rapport with audiences have made him uniquely popular in British jazz.  He has received over 25 British Jazz Awards, most recently in 2014 for clarinet, and has twice been made BBC Jazz Musician of the year.